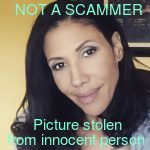 description:
My name is joy david from usa bronx new york precisely I served as an instructor in untied states military academy.I used that education as the robotics project officer in the directorate of combat development at the armor center and later as the armor officer.As an engineer, I lieutenant both a combat company and a mobile assault company.I later branch transferred to armor. as an armor field grade officer, I was assigned to 11th armored cavalry regiment where I served as for the 1st squadron.I I spent 2 years training leaders and soldiers at the national training center as the lieutenant of national training center. I have a son of my late husband, his name is john and he is now 7 years old schooling at bronx boy scout academy in new york. i’m in afghanistan today because of my rank and I have been here about 8 months, I left less than one month to go home. 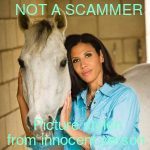 WHY IS IT A SCAM / FAKE:
IP is a proxy
IP doesn’t correspond location
Pictures are stolen from a known source
Pictures are widely used in scams
Registered on different sites with different details
Nigerian wording

Comments off
Posted in Female profiles and tagged as datingnmore, facebook, military scammer, vk
« Previous Next »
Comments are closed.